He had been apparently well until 2 months prior to his consultation with us at the heart and lung clinic.. He had earlier attended a pre-employment checkup where he was diagnosed to have uncontrolled hypertension. He was known to have hypertension for 5 years for which he was on medications. He came to us for further evaluation of his high blood pressure. He had no other co-morbidities.

Physical Examination in Coractation of the Aorta

Physical examination revealed a blood pressure 170/90 mm Hg in both arms, a heart rate of 74 beats/minute and a continuous murmur in the interscapular region of the back. Femoral pulses were palpable bilaterally but weak and delayed compared to the brachial pulses.

His echocardiogram showed bicuspid aortic valve and mild (insignificant) mitral insufficiency. A cardiac silhouette at the upper limit of normal and notching of the ribs was observed on the chest radiography. His CT angiogram showed severe coarctation of aorta with well developed collaterals. 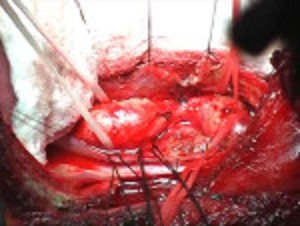 Surgery for Coarctation of the Aorta

It was decided to correct the lesion by surgery (Thoracotomy and Interposition graft). The procedure was done via a left posterolateral thoracotomy through the fourth left intercostal space. Entry in to the thorax was difficult because of the presence of numerous collaterals. Bleeding from the collaterals had to be carefully controlled.

The narrowed segment of the aorta was resected and continuity of the thoracic aorta was restored using a collagen impregnated Dacron interposition graft. The aorta needed to be clamped for 23 minutes.

He was discharged from hospital after an uneventful postoperative hospital stay of 6 days. His blood pressure medications could be reduced substantially. A repeat CT angiogram just before his discharge showed normal luminal continuity of the thoracic aorta. He was selected for his job and is now gainfully employed.

Coarctation of the aorta is a congenital (present from birth) vascular lesion typically diagnosed in early life, accounting for 5 to 10% of all congenital cardiovascular malformations but may rarely go undetected well into adulthood. The narrowing classically occurs in the proximal part of the descending thoracic aorta, just distal to the origin of the left subclavian artery.

Other coexisting conditions with coarctation of the aorta could include a patent ductus arteriosus, bicuspid aortic valve with systolic ejection sound(s) and/or murmurs. Confirmatory tests could include an echocardiogram or a CT scan of the chest to delineate the extent (short or long segment) of narrowing. A short segment narrowing can be corrected with a simple resection and anastamosis. A longer  narrowed segment may require an interposition graft. The procedure is usually done by a Cardiac Surgeon.

Long term Outlook in Coarctation of the Aorta.

Prognosis and survival in coarctation of the aorta depend on the disease severity and patient’s age at the time of correction. If undiagnosed and untreated, death in these patients is usually due to heart failure, coronary artery disease, aortic rupture/dissection, concomitant aortic valve disease, infective endarteritis /endocarditis, or cerebral hemorrhage. There are few reports of patients first diagnosed with uncorrected coarctation of the aorta at a very late age. Treatment consists of aggressive antihypertensive therapy, endocarditis prophylaxis, and early corrective surgical intervention.