Canabidiol is a naturally occurring chemical compound (canabinoid) in the plant Cannabis Sativa, also known as the Marijuana plant in common parlance. Important naturally occurring chemicals in the Cannabis Sativa plant are THC (delta-9-tetrahydrocannabinol) and CBD  (Canabdiol). THC is deleterious to human health. It also is the compound that gives the user the “high” or the “kick” when he / she uses Cannabis in some form. Cannabis products can be smoked, vaped, chewed, swallowed, or be locally applied on the skin via creams, lotion and oils.

Unlike THC, CBD has been shown to have some beneficial effects on the human body. Most importantly, Canabidiol does not cause a “high” unlike THC. Canabidiol is also not addictive with prolonged usage. These  specific effects of not causing “a high” along with some possible beneficial effects on the human body have made Canabidiol a very popular health supplement in recent times. Unfortunately however intelligent and sometimes misleading marketing  out paces facts and honest research, all in search of a quick buck for a manufacturing company!

CBD  is a relatively new kid on the block but it is certainly turning eyeballs and sweeping a few people off their feet on the high street because of  some celebrity endorsements. Cannabis with a very low concentration of THC (<<0.3%) is available as an OTC medication as well.

The classical Cannabis Sativa (Marijuana plant) contains about 17% THC and about 0.2% CBD in its leaves and stalks.  The Hemp plant is a unique subspecies of the Cannabis plant that contains about 15-18% CBD and less than 0.3% THC in its leaves and stalks. Hemp seeds (derived from the Hemp plant) contain 0% THC but also very little CBD. Hemp derived Canabidiol  is therefore very popular as it considered to be a pure and potent form of Cananbidiol and contains very little THC. Hemp seed, and Hemp seed derived oil contain much much less Canabidiol and virtually no THC.

Since CBD and Hemp seed oil are both derived from the Cannabis family of plants, they are sometimes incorrectly marketed as the same thing.  Why would a shady company want to do this? Pure CBD extraction is an expensive process compared to cold pressing of hemp seeds for oil extraction. Purer forms of CBD cost much more than the humble Hemp seed oil which has much less CBD. An unscrupulous company with shady manufacturing processes could add some cheap Hemp seed oil into their product, then adorn the wrapper and label with Cannabis Sativa leaves to fool gullible customers into thinking that they are buying a CBD product and charge a premium.

They may be right theoretically as Hemp seed does have a small amount of CBD. They however mislead a customer into paying for a product that has much less CBD than what the label containing beautiful Marijuana leaves suggest.  So how does a discerning customer find out? Hemp seed oil  containing products have to be labelled as “containing Cannabis Sativa seed oil”. CBD containing products will have a label stating they “contain Canabidiol”. 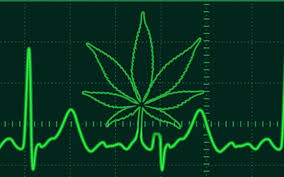 It must however be unambiguously stated that at this point in time, a lot more research involving a lot more subjects is required before the  acclaimed beneficial  effects of CBD are accepted by a large number of treating physicians. At this point in time, CBD is not yet  a common item on a cardiologist’s or cardiac surgeon’s  prescription!

The American Heart Association on CBD and THC.

The American Heart Association has recently published a scientific statement on medical and recreational marijuana in its journal Circulation in September 2020.  This document is an internationally accepted resource for reference by many physicians across the USA and the rest of the world.

The FDA regulation of CBD products

Cannabis dertived products containing less thn 0.3% THC are considered as health supplements and not as drugs. The FDA therefore does requlate them or guarantee their purity and dosing accuracy.  CBD products are available as OTC in many places across the world. There is published literature regarding the divergence of the dose CBD on the label and in the actual product. The FDA however does not take any responsibility for this.

The W.H.O and CBD

In june 2018 the WHO published a  report  on CBD , its potential use and abuse.

CBD containing products with less than 0.3% THC are legal according to the federal law of the USA and some other countries. They are however illegal as per state laws in some US states.

CBD and grapefruit – what’s the connection?

Grapefruit contains compounds called furanocoumarins that could enhance or suppress the action of some critical enxymes in the liver (CYP 450) and gut (CYP 3 A4) that are responsible for the metabolism and excretion of many commonly prescribed drugs including many cardiac medications.  The blood levels of these drugs could thus become subtheraputic or toxic when they are combined with grape fruit.  CBD has pharmacological actions that are very similar to grapefruit.

What is a grapefruit warning? 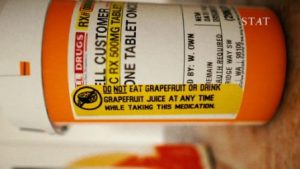 The US FDA has popularized the term “grapefruit warning” to indicate that if a drug has a grapefruit warning on the label, it could interact with other drugs and cause dangerous consequences in the body. The phrase is derived from the early studies regarding the interactions of grapefruit and other drugs. Researchers found that the effects of some drugs were enhanced and the effects of some others diminished when these drugs were combined with grape fruit juice.

The mechanism is thought to be mediated by the ability of grapefruit to either enhance or suppress  some critical  enzymes in the liver (CYP450) and intestine (CYP3A4) that are normally responsible for the metabolism and eventual excretion of many drugs. An enhanced enzyme function causes quicker metabolism of the drug and lowers its blood level and clinical effects.

A diminished enzyme function causes slower metabolism of the drug that increases its blood level and clinical effects. The amounts and activity of these enzymes in the liver and  intestine varies from person to person. Some people have a lot of enzymes and others just a little. So grape fruit could affect different people differently even when they take the same drug. Grape fruit  interacts with drugs by its effects on these enzymes and also by interfering with (enhancement or suppression) the functions of  proteins in the blood  called drug transporters.

Canabidiol is known to have very similar pharmacological actions to grape fruit  so an easy rule of thumb is to avoid Canabidiol if you also on cardiac drugs that have a grape fruit warning on the label.

Canabidiol is known to interact with many cardiac drugs and either enhance or suppress their effects. A rule of thumb is to avoid Canabidiol if any of the medications you are currently on has a “grapefruit warning”.

Some cardiac drugs with grapefruit warnings

Some common Non cardiac drugs with a grapefruit warning

The bottom line and Disclaimer:

This write up does not promote the use of Canabidiol in general or endorse any specific brand of Canabidiol in particular. The purpose of the write up is only to shed some light on the potential risks of combining Canabidiol with commonly used cardiac medications. Always ask your doctor for personalized advice regarding the safety of combining Canabidiol with your cardiac medications. Do not make any decisions regarding your medications based solely on the contents of this article without consulting an appropriately qualified specialist physician.